The Folly of Rubrics and Grades
1940
post-template-default,single,single-post,postid-1940,single-format-standard,bridge-core-1.0.5,ajax_fade,page_not_loaded,,qode-child-theme-ver-1.0.0,qode-theme-ver-18.1,qode-theme-bridge,qode_header_in_grid,wpb-js-composer js-comp-ver-6.0.2,vc_responsive

The Folly of Rubrics and Grades

11 Mar The Folly of Rubrics and Grades

Before I abolished grades, I went through my rubrics stage. I was convinced I could solve my assessment problems if I could just fine-tune my rubric production. I struggled for months trying to create ‘student-proof’ rubrics that would allow me to consistantly assess their learning. I can’t say that the time I spent on rubrics was a waste – because I learned a lot – but what I learned is that rubrics have little to no place in the classroom.

Here is a sample rubric that I would have used years ago to assess writing:

Something about the numbers always bothered me. I found that making the choice for what something would be out of was a huge deal, as it very much affected the grade my students ended up with.

I struggled with what each category should be scored out of. I knew that I wanted to keep the number small. For example, I certainly didn’t want to have each category out of 100. I was not interested in trying to differentiate between a 67 and a 68.

For some reason, making these categories out of 4 or 5 or 10 seemed to be a popular way to go. But to this day, I have not reconciled some of the problems that developed from choosing the 4, 5 or 10 scale. 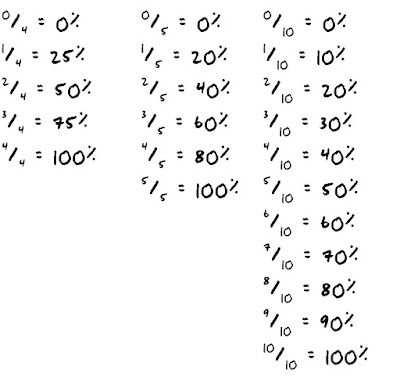 Do you have a preference? If you do, I’m dying to know which one you prefer and why.

As far as I’m concerned there is no choice and here’s why:

I guess I could give half marks with these 4 and 5 scales. But where do I draw the line. Would it ever be appropriate to give quarter marks? 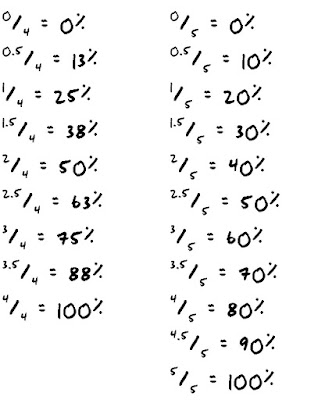 And if you don’t like number or letter grades, there is no shortage of teachers who would rather use word descriptors such as: (read the scales from left to right)

You’ll notice that even when teachers move away from numbers or letters, the kids or parents may not. Above, the first choice shows a two point scale – a pass or fail kind of scale. The second choice shows a three point scale and the last option a four point scale. Even though teachers might not be thinking percentages anymore, the kids and parents may do the conversions themselves. A PROFICIENT to them may mean 75%.

Symantics become the largest problem with written judgements like these. For example, some people would rather see the lowest option to say NOT YET inorder to imply optimism and hope, while others may still want more than EXCELLENT in order to really differentiate the students who are the very best.

There is no doubt that there are plenty of people who would love to discuss which scale is better. Teachers could spend the rest of their careers attending professional development sessions where we discuss, argue, bicker and nit-pick over which reductionist scale is better. Some teachers may like numbers, some letters, while others prefer happy faces or words. There may be small, almost indistinguishable differences between these scales, but keep in mind they all have one common characteristic – they are all reductionist in nature. They all attempt to take something as messy and beautiful as learning and reduce it all to a single or double digit.

Alfie Kohn speaks to the false sense of objectivity marks and how so marks and rubrics have misled so many for so long, and how grading can in fact be so degrading.

There is a kind of educational malpractice going on when teachers profess to be able to reduce a child’s learning to a symbol.

What grades offer is spurious precision, a subjective rating masquerading as an objective assessment.

There is absolutely nothing objective about grading, and in 1976, Paul Dressel wrote a brilliant summary of what a grade actually means:

A mark or grade is an inadequate report of an inaccurate judgment by a biased and variable judge of the extent to which a student has attained an indefinite amount of material.

A more profound or practical statement on the subject is hard to imagine.

Grades and rubrics are a solution in search of a problem that will further destroy learning for its own sake.

It’s been five years since I used a rubric. I simply don’t need them, nor do my students.
Rather than spending time asking how can we grade better, we really need to be asking why are we grading. And then we need to stop talking about grading altogether and focus our real efforts on real learning. Joe

It’s been five years since I used a rubric. I simply don’t need them, nor do my students.

If we can agree that reducing learning to a symbol is a kind of malpractice then we can start to discuss how we can replace grading with something far better.

I blog regularly about this topic @ www.joebower.org